The United States Trustee overseeing FTX’s bankruptcy proceedings has dubbed the exchange the “fastest big corporate failure in American history,” and has called for an impartial investigation into its demise. 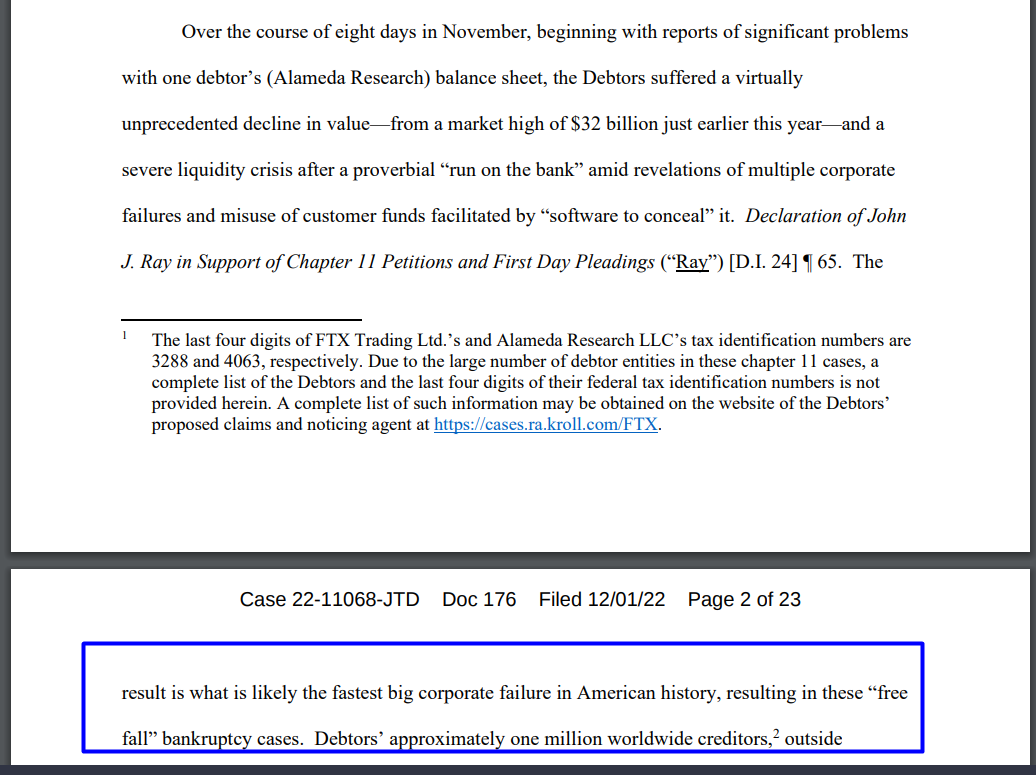 The American Trustee Andrew Vara noted in his motion on Dec. 1 that over eight days in November, debtors “suffered a virtually unprecedented decline in value” from a market high of $32 billion earlier in the year to a severe liquidity crisis after a “proverbial ‘run on the bank.’”

Vara has called for an independent investigation of FTX, stating it was “especially important because of the wider implications that FTX’s collapse may have for the crypto industry.”

The appointment of an independent examiner would be in the interests of the Debtors’ creditors and other parties in interest in the Debtors’ estates, consistent with Code section 1104(c)(1).

In addition to the statement, “an examiner could—and should—investigate the substantial and serious allegations of fraud, dishonesty, incompetence, misconduct, and mismanagement by the Debtors, the circumstances surrounding the Debtors’ collapse, the apparent conversion of exchange customers’ property, and whether colorable claims and causes of action exist to remedy losses.”

In regards to FTX’s collapse, Vara says the issues at stake are simply too important and large to be investigated internally.

In other news, DeFi protocol, Ankr, confirmed a multi-million dollar attack that occurred on December 1st. Ankr protocol dubbs itself the first “node-as-a-service” platform. Allegedly, the exploit was a result of a fault in its code that permitted limitless token minting.

Crypto News Land (cryptonewsland.com) , also abbreviated as “CNL”, is an independent media entity — we are not affiliated with any company in the blockchain and cryptocurrency industry. We aim to provide fresh and relevant content that will help build up the crypto space since we believe in its potential to impact the world for the better. All of our news sources are credible and accurate as we know it, although we do not make any warranty as to the validity of their statements as well as their motive behind it. While we make sure to double-check the veracity of information from our sources, we do not make any assurances as to the timeliness and completeness of any information in our website as provided by our sources. Moreover, we disclaim any information on our website as investment or financial advice. We encourage all visitors to do your own research and consult with an expert in the relevant subject before making any investment or trading decision.

José is a crypto enthusiast who trades crypto night and day. He loves to share his trading stories and experiences in all his published articles. José likes to hang out and travel to meet new friends. Enjoys sushi, vodka, and tequila.