Taming the Cascade With BEM and Modern CSS Selectors 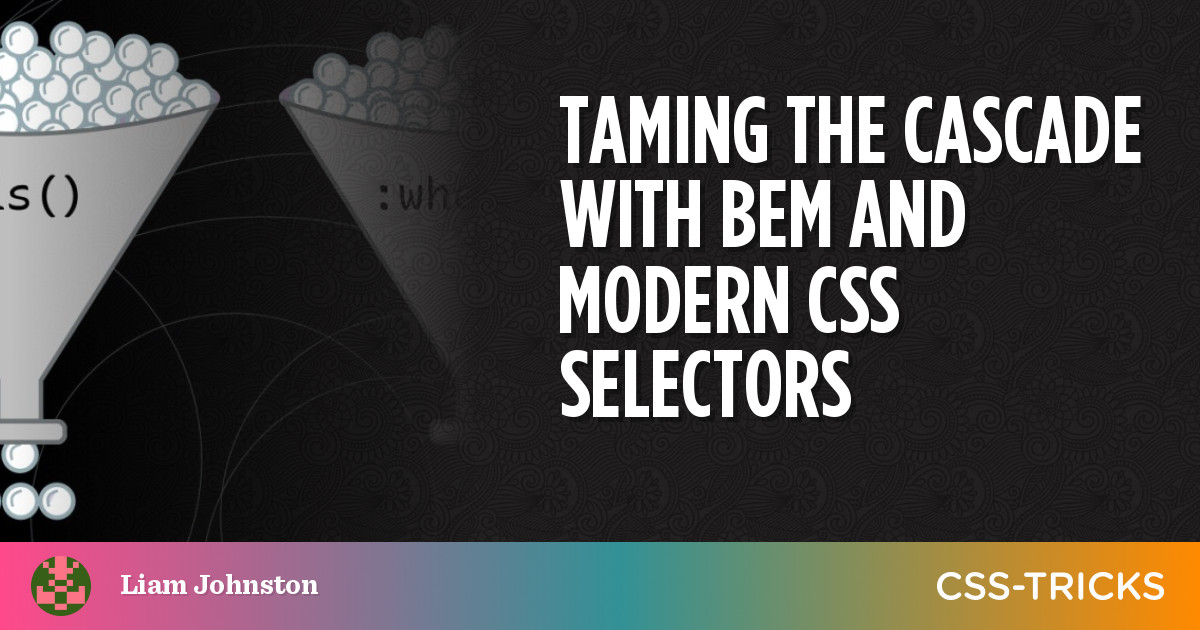 BEM. Like seemingly all techniques in the world of front-end development, writing CSS in a BEM format can be polarizing. But it is – at least in my Twitter bubble – one of the better-liked CSS methodologies.

Personally, I think BEM is good, and I think you should use it. But I also get why you might not.

Regardless of your opinion on BEM, it offers several benefits, the biggest being that it helps avoid specificity clashes in the CSS Cascade. That’s because, if used properly, any selectors written in a BEM format should have the same specificity score (0,1,0). I’ve architected the CSS for plenty of large-scale websites over the years (think government, universities, and banks), and it’s on these larger projects where I’ve found that BEM really shines. Writing CSS is much more fun when you have confidence that the styles you’re writing or editing aren’t affecting some other part of the site.

But I’m not really here to sell you on BEM. Instead, I want to talk about how we can use it alongside modern CSS selectors — think :is(), :has(), :where(), etc. — to gain even more control of the Cascade.

What’s this about modern CSS selectors?

The CSS Selectors Level 4 spec gives us some powerful new(ish) ways to select elements. Some of my favorites include :is(), :where(), and :not(), each of which is supported by all modern browsers and is safe to use on almost any project nowadays.

:is() and :where() are basically the same thing except for how they impact specificity. Specifically, :where() always has a specificity score of 0,0,0. Yep, even :where(button#widget.some-class) has no specificity. Meanwhile, the specificity of :is() is the element in its argument list with the highest specificity. So, already we have a Cascade-wrangling distinction between two modern selectors that we can work with.

The incredibly powerful :has() relational pseudo-class is also rapidly gaining browser support (and is the biggest new feature of CSS since Grid, in my humble opinion). However, at time of writing, browser support for :has() isn’t quite good enough for use in production just yet.

Lemme stick one of those pseudo-classes in my BEM and…

Even though the second selector is last in the source order, the first selector’s higher specificity (0,2,0) wins, and the color of .something--special elements will be set to red. That is, assuming your BEM is written properly and the selected element has both the .something base class and .something--special modifier class applied to it in the HTML.

Used carelessly, these pseudo-classes can impact the Cascade in unexpected ways. And it’s these sorts of inconsistencies that can create headaches down the line, especially on larger and more complex codebases.

Dang. So now what?

Remember what I was saying about :where() and the fact that its specificity is zero? We can use that to our advantage:

The first part of this selector (.something) gets its usual specificity score of 0,1,0. But :where() — and everything inside it — has a specificity of 0, which does not increase the specificity of the selector any further.

:where() allows us to nest

Folks who don’t care as much as me about specificity (and that’s probably a lot of people, to be fair) have had it pretty good when it comes to nesting. With some carefree keyboard strokes, we may wind up with CSS like this (note that I’m using Sass for brevity):

In this example, we have a .card component. When it’s a “featured” card (using the .card--featured class), the card’s title and image needs to be styled differently. But, as we now know, the code above results in a specificity score that is inconsistent with the rest of our system.

A die-hard specificity nerd might have done this instead:

That’s not so bad, right? Frankly, this is beautiful CSS.

There is a downside in the HTML though. Seasoned BEM authors are probably painfully aware of the clunky template logic that’s required to conditionally apply modifier classes to multiple elements. In this example, the HTML template needs to conditionally add the --featured modifier class to three elements (.card, .card__title, and .card__img) though probably even more in a real-world example. That’s a lot of if statements.

The :where() selector can help us write a lot less template logic — and fewer BEM classes to boot — without adding to the level of specificity.

Here’s same thing but in Sass (note the trailing ampersands):

Whether or not you should opt for this approach over applying modifier classes to the various child elements is a matter of personal preference. But at least :where() gives us the choice now!

We don’t live in a perfect world. Sometimes you need to deal with HTML that is outside of your control. For instance, a third-party script that injects HTML that you need to style. That markup often isn’t written with BEM class names. In some cases those styles don’t use classes at all but IDs!

Once again, :where() has our back. This solution is slightly hacky, as we need to reference the class of an element somewhere further up the DOM tree that we know exists.

Referencing a parent element feels a little risky and restrictive though. What if that parent class changes or isn’t there for some reason? A better (but perhaps equally hacky) solution would be to use :is() instead. Remember, the specificity of :is() is equal to the most specific selector in its selector list.

So, instead of referencing a class we know (or hope!) exists with :where(), as in the above example, we could reference a made up class and the <body> tag.

The ever-present body will help us select our #widget element, and the presence of the .dummy-class class inside the same :is() gives the body selector the same specificity score as a class (0,1,0)… and the use of :where() ensures the selector doesn’t get any more specific than that.

That’s how we can leverage the modern specificity-managing features of the :is() and :where() pseudo-classes alongside the specificity collision prevention that we get when writing CSS in a BEM format. And in the not too distant future, once :has() gains Firefox support (it’s currently supported behind a flag at the time of writing) we’ll likely want to pair it with :where() to undo its specificity.

Whether you go all-in on BEM naming or not, I hope we can agree that having consistency in selector specificity is a good thing!