“The Purpose Ether ETF has now reached over 50,000 $ETH. Inflows are continuing to increase despite Ether’s recent sell-off.” 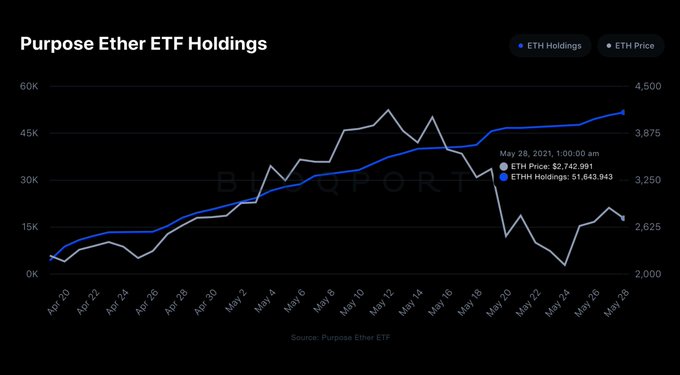 Purpose Investments is a Canada-based asset management company with more than $11 billion in assets under management (AUM).

The Ether ETF is a type of security that tracks the overall price of ETH. It enables investors to trade and purchase shares of it on traditional exchanges or circumventing crypto trading platforms.

It is expected to offer investors a simple, affordable, and efficient way to attain direct exposure to ETH with the convenience of eligibility in any investment account.

Recently, Bitcoin ETF by Purpose Investments experienced more investments of 898 BTC, which could signify that retail demand was getting back on track.

ETH 2.0 is touted as a game-changer that will offer a transition to a proof-of-stake (POS) consensus mechanism from the current proof-of-work (POW) platform. As a result, lower costs and more scalability are expected to be experienced.

On the other hand, the amount of Ethereum supply that remained active in the last three to six months reached a 22-month high of 16,805,299.023 ETH, as revealed by on-chain metrics provider Glassnode.

Meanwhile, Paypal’s crypto volume reached an ATH of $300 million, as disclosed by its custodian, itBit. 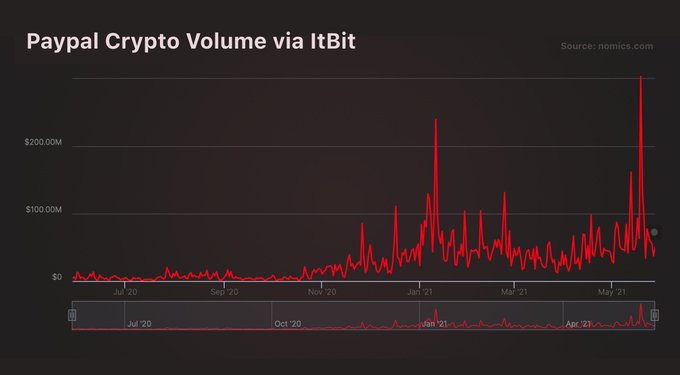 However, it remains cautious to observe if Ethereum will regain its momentum to continue scaling new heights in 2021. The second-largest cryptocurrency was affected by the recent market crash, that the price nosedive from a record-high of $4,350 to lows of $2,000.

Over 5 Million ETH, Worth $13 Billion, Has Been Deposited to the Staking Contract

Roughly three years after releasing its first crypto-related product, the private US venture capital firm a16z has outlined plans to double down via a ‘radically optimistic’ digital asset fund. The company’s partners called the industry ‘the future of finance.”

Following the recent FUD around high energy usage from cryptocurrency projects, Enjin – the NFT ecosystem provider and creator of the ERC-1155 token standard, has turned its JumpNet blockchain carbon negative. This comes after joining the Crypto Climate Accord, aiming to decarbonize the industry.

Ever since Tesla’s Elon Musk criticized bitcoin for the high energy used for mining, especially such coming from coal fuels, the entire cryptocurrency space has been focused on this concern. Apart from the emergence of new organizations aiming to transition BTC’s proof of work consensus algorithm to more clean energy sources, other projects have also informed of similar plans.

Enjin, describing itself as a growing “ecosystem of blockchain software products that make it simple for anyone to develop, trade, monetize, incentivize, and market with blockchain,” is the next one, according to a press release shared with CryptoPotato.

To do so, the protocol has joined the Crypto Climate Accord. Launched by Energy Web, the Alliance for Innovative Regulation, and RMI, the Accord is a private sector-led initiative aiming to make the digital asset space 100% renewable.

“We are happy to see Enjin join this fast-growing community of companies that want to build solutions to decarbonize the crypto sector. The race is on for someone like Enjin to lead the way with delivering proof of green NFTs while promoting standard energy and carbon industry practices.” – commented Global Markets Lead at Energy Web, Doug Miller.

The statement further outlined that Enjin’s arm JumpNet “already uses less energy than the average US household and 99.99% less electricity than Ethereum.” It has also acquired carbon offset credits through Beyond Neutral, which has allowed it to become carbon negative. In other words, JumpNet is now “offsetting a higher amount of carbon than it produces.”

According to the PR, JumpNet allows developers to build a “direct response” to criticism coming from global watchdogs as they can build “eco-friendly, free solutions.”

Enjin CEO, Maxim Blagov, highlighted the significance of putting Planet Earth in the first spot but also continuing to develop and innovate. He added, “carbon neutrality for JumpNet is an important step toward our vision of a sustainable NFT ecosystem for Enjin and our partners.”

Going carbon neutral now means that Enjin has actually achieved this goal ahead of schedule as it had planned to do so by 2030 initially.

The total amount of ETH staked ahead of the upcoming Ethereum 2.0 upgrade has grown significantly and will likely continue to increase as the launch date draws closer.

Data from CryptoQuant revealed yesterday that more than 100k ETH worth over $200 million as per current prices was sent to the Ethereum 2.0 deposit contract in a single day.

With the new staking, the total value of ETH now locked up in the Eth2 contract is currently more than 5% of the cryptocurrency’s entire circulating supply.

Earlier this month, the Ethereum network witnessed a major milestone when the total amount of coins staked on ETH 2.0 exceeded 5.2million ETH, which was worth a whopping $14 billion back then.

At the time of writing, there are 174,318 validators processing the blocks on ETH 2.0 with more than 5.88 million ETH staked in the deposit contract, which is currently worth $11.6 billion due to the current bearish market conditions. The figure represents more than a 1,000% increase from the minimum 524,000 ETH threshold required to move forward with the staking process.

The increasing number of validators and staked ETH is impressive as it shows that the Ethereum community believes in the possibilities that ETH 2.0 will unlock.

The ETH 2.0 upgrade was initiated to address some of the pressing issues of the Ethereum network, such as scalability and high gas fees.

The network-wide upgrade will introduce sharding to improve Ethereum’s efficiency and scalability. Sharding will ensure that the network will use parallel processing by breaking up data verification tasks among various sets of nodes, with each being responsible for verifying only the data it received.

Although sharding is a layer-1 scaling solution that will come with ETH 2.0, Ethereum co-founder Vitalik Buterin revealed in March that his team is already completing a layer-2 solution that would make the network 100x scalable within the next few months.

Additionally, Ethereum will be making a shift from the extremely complex and power-intensive Proof of Work (PoW) to the more efficient Proof of Stake (PoS) consensus algorithm. The move to a PoS mechanism means that Ethereum 2.0 will become an eco-friendly blockchain.

With these adjustments, the ETH 2.0 network will supposedly be faster and more robust than the current system.

When is the right time to buy Bitcoin?

Will Polygon still be necessary after Ethereum 2.0 is live?

India’s CBDC plan: Here’s the how, when and why

7 Altcoins That Make You a Billionaire in 2022

Is $SHIB Better Than $DOGE? And Other Crypto ($BTC, $ETH, $CHZ) News From Paraguay