As the market declined last week (and continues to do so), Litecoin was one of the few currencies to increase in value.

CoinGecko reports that the price of a single Litecoin is at $63.69 at the moment. The token is up 8% in the last 24 hours, giving traders and investors some sense of relief. Litecoin (LTC) thus pulled off a surprise, edging out the other cryptos in the top 20 list.

The alternative cryptocurrency that has been around for a while appears to be gaining popularity among investors.

Only 35% of LTC holders are profitable, per CoinMarketCap. The percentage of holders who would benefit monetarily from a sale at the current time is thus reduced.

While this rebound is encouraging, the current state of the market following the contagion that was FTX means that LTC may not be able to avoid more market declines despite the uptick.

As things stand, the market environment is very unfriendly for bulls. Despite the market decline, a few cryptocurrencies have managed to rise into the top 20.

The relative strength index (RSI) for LTC is rapidly approaching the oversold zone, indicating a sharp reversal from a bullish to a negative trend.

At its present level of $63.69, the price is still above the 38.20 percent Fibonacci retracement zone. 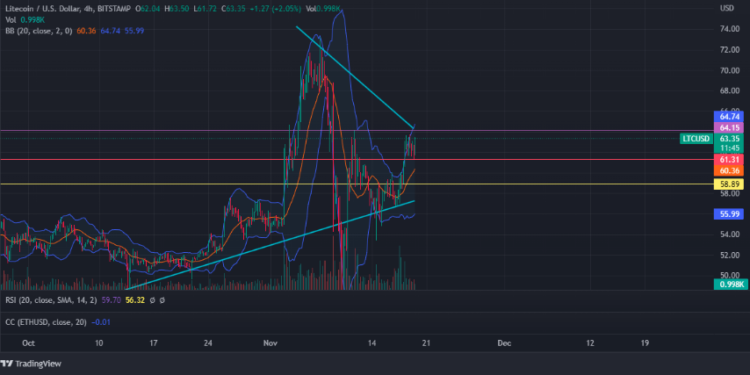 On a 4-hour timeframe, however, RSI values are increasing, indicating a growing bullish momentum.

Currently, the market structure resembles a bullish descending triangle, with a likely bullish breakout around the $64.15 price level.

In addition to supporting a likely positive breakout, the expanding Bollinger band indicates volatility in the coming weeks.

As the bulls retest the $64.15 price resistance in the coming weeks, they should observe the market environment.

Long-term LTC investors appear to be selling, while long positions on LTC exceed short positions, according to CoinGlass.

With massive short liquidations occurring in LTC over the previous few days, this change in momentum is in stark contrast to present market conditions.

What To Anticipate With LTC

LTC appears to be moving against the market, diminishing or losing its link with BTC and ETH. As the scenario for Litecoin improves, bulls must be cognizant of the current unfavorable market conditions.

Defending the $61.31 support is sufficient to maintain LTC’s bullish momentum if it cannot breach the $64.15 resistance.