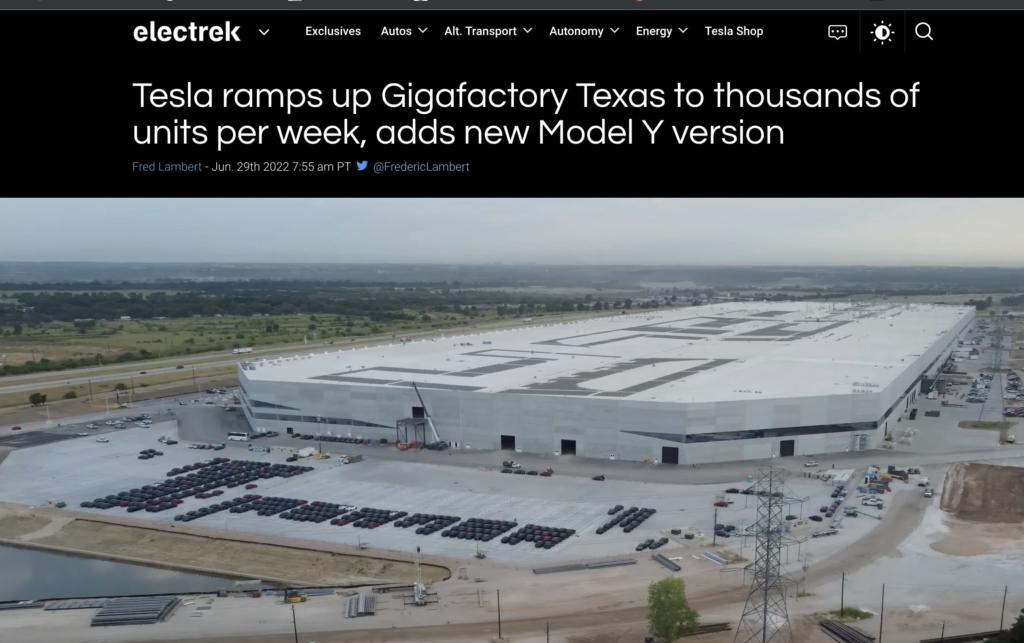 Electrek reports that they have obtained inside information for the first time that says Tesla Texas production rate reached 2000-5000 cars per week.

Joe Tegtmeyer has daily drone footage of Tesla Austin. Joe says Tesla Texas production is just over 100 per day (aka under 1000 per week). If the Electrek report has any accuracy then perhaps Austin could ramp very soon to 2000-5000 cars per week but claims that it has already happened ramped appear to be incorrect.

The Tesla Gigafactory at Berlin Germany is significantly ramping with reports of a third shift to reach 7X24 hour operation starting July 4th which will increase production to 1500 to 2000 cars per week.

Electrek reported:
Sources familiar with the matter say that Tesla has managed to ramp up production since adding a new version of the Model Y, Model Y Long Range, and it now produces several thousand vehicles per week.

Giga Texas 29 June 2022 … Model Y’s on the move & production now 100+ per day! activity all over and not slowing down as we close out June and the 2nd Quarter! See more in my video later today! @JoeTegtmeyer pic.twitter.com/FDVFcUbBnM

The Tesla Shanghai factory is getting a production upgrade in the first two weeks of July. This will increase production capacity to 22,000 cars per week. Even with the two week shutdown, this would bring Tesla Shanghai to 200,000 to 220,000 cars in the third quarter.

This and detailed analysis of prior months in China and estimates for the other factories will likely result in about total Tesla Q2 2022 with 255,000 deliveries and 260,000 cars produced.

WHY ARE PROGRAMMERS SO IMPORTANT FOR A COMPANY?

CateCoin drops by 35% because of no Binance Listing – Is it Dead?