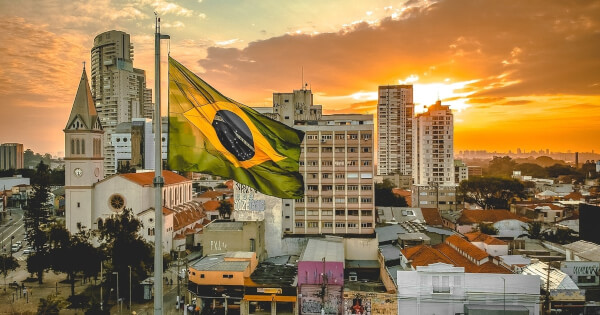 The CEO of Coinbase, Brian Armstrong, suggested that Brazil and Argentina should switch to Bitcoin (BTC) as their national currency as Brazil and Argentina were beginning preparatory work for a potential common currency. This sparked a variety of discussions over the viability of Bitcoin (BTC) as a national currency. The Argentine peso and the Brazilian real will continue to be legal tender in both countries until a single currency can be established between them. The two nations in South America made the announcement on January 22 that they are beginning to plan for the creation of a joint currency.

The action may result in the formation of the world’s second-largest currency bloc.

Armstrong immediately rushed to Twitter when the news emerged to propose that Bitcoin would be the “perfect long-term bet” and to query whether or not the two governments would take it into consideration.

Raoul Pal, founder and current CEO of Global Macro Investor, was against the plan.

According to Pal, it is not optimal to have a national currency that “down 65% during the weak portion of the economic cycle and appreciates 10 times during the strong half of the cycle.”

The CEO pointed out that firms would have trouble preparing and hedging in this case because of the current climate. There were just a few others in the town who shared Pal’s opinion.

One person on Twitter claims that the only viable use for bitcoin is as a store of wealth, comparable to gold.

They posted the following on their Twitter account: Meanwhile, another Twitter user brought up the poor pace of transactions on the Bitcoin network and complained that they would take too long for everyday usage.

However, this was swiftly refuted by another community member who asserted that Bitcoin would become the “best means of trade” after the Lightning Network is completed. Armstrong’s statement may have been motivated by the fact that El Salvador, another Latin American nation, acknowledged bitcoin as a form of legal money in the year 2021.

The action resulted in several positive outcomes for the nation, one of which being an increase in tourism the next year, which totaled 1.1 million visitors to the nation.

In addition, El Salvador was able to use the revenues from its Bitcoin purchases to fund the construction of schools as well as a veterinary hospital.

Brazil and Argentina are no strangers to digital assets.

On November 29, the Chamber of Deputies in Brazil passed a bill that makes it possible to use cryptocurrencies as a form of payment in the nation.

Although the new legislation acknowledges cryptocurrency as a mode of payment, it does not make any particular cryptocurrency legal tender inside the nation.

BTC as Remittance? Pouch partners with Strike to Offer Faster Remittance Process from US to PH Through BTC’s Lightning Network